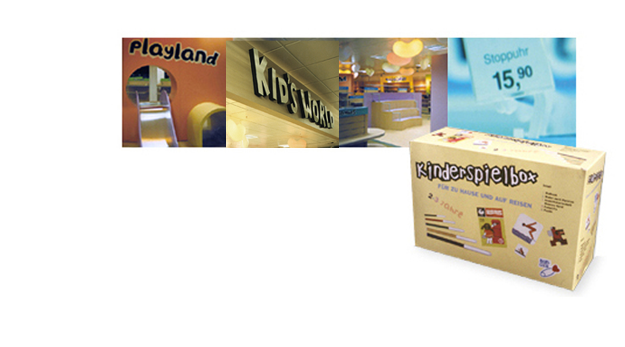 In the mid nineties C&A, a top fashion retailer, was considering changing it’s formula to a warehouse. SVT Creative Consultants created a home furnishing department as well as a toy store department named Kids World. I was responsible for all in-store graphics as well as the development of a complete packaging line for Kids World.
The assortment was divided into product groups based on age groups. Distinction between the product groups was achieved by colour coding and and typographic styles. The graphic system was simple and flexible. Design agencies in China implemented the style without any difficulties based on a brand guide. The pilot store was in Düsseldorf, afterwards there was a roll out of 28 stores in Germany. Later on, C&A dropped the warehouse direction again and returned to it’s roots of selling apparel.